TikTok: Can I Say A Bad Word video explained – origin and hilarious examples! 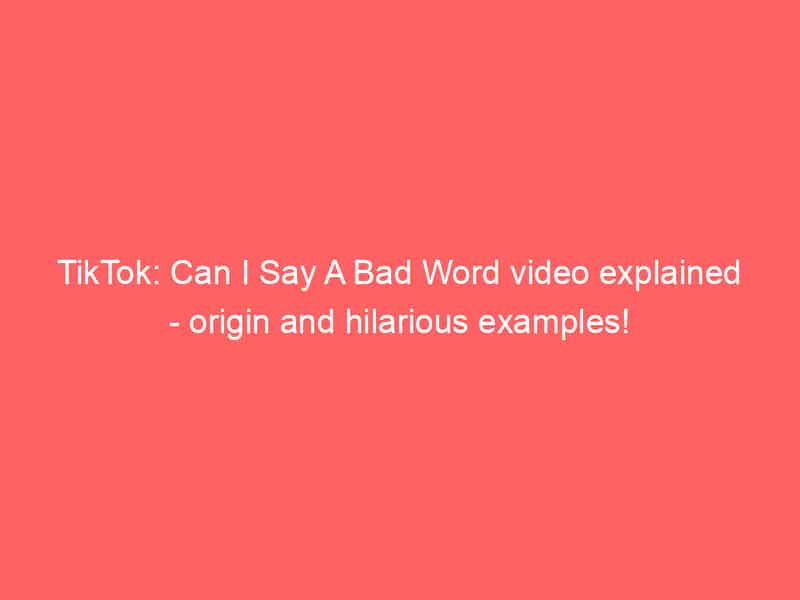 A young girl makes viewers laugh as she asks her parents ‘can I say a bad word’ while being recorded. Many videos of children wanting to say bad words are often spiralling the internet, especially TikTok. But this video, in particular, has gained lots of online attention.

Continue reading to check out this hilarious video along with many others like it. Below, we provide amazing TikTok examples which have been popular for months and are sure to make you giggle!

What is the ‘can I say a bad word’ video

RM Videos, a YouTube channel with over two million subscribers, recently uploaded a popular video onto their account.

Within the video, a young girl with an American accent is shown asking her parents if she is allowed to say a bad word.

See also  Meaning of "MB" on TikTok explored with examples

Despite being told ‘no’ by her mother, the little girl then goes on to repeatedly ask the same question while she includes the said phrase in her sentence.

“Oh shoot” being the phrase she is forbidden from using.

This upload has now gained over three million views along with over 100,000 likes in total.

The comment section is filled with tons of feedback, many viewers praise the young girl for being smart enough to ask for permission before repeating herself multiple times.

Another user named Raman kumari compared the girl to Einstein in their comment:

“This girl just learned a big loophole. She can say the word if she’s just asking if she can say it ?”

More ‘can I say a bad word’ TikTok videos

Young children using inappropriate language such as swearing and curse words seem to be constantly trending online as viewers find them hilarious.

TikTok, the video sharing app, is well known for its hilarious viral videos.

A popular TikTok hashtag #canisayabadword currently has over 26 million views and is full of this particular type of comical content.

Back in 2020, a user named @jus_dell_ uploaded a video featuring a popular audio containing bad words.

Another user named @craig85white used a funny audio to lip sync a scenario involving bad words in a TikTok video.

Go ahead and check out more viral videos including young individuals using different forms of age-restricted language for even more laughter!