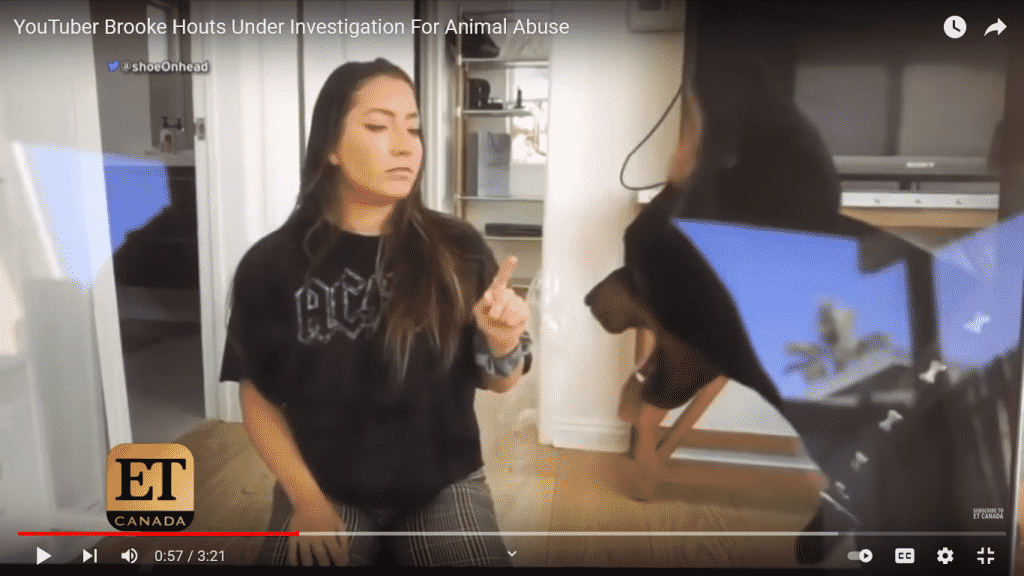 In August 2018, YouTube users came across a video showing YouTuber Brooke Houts abusing her pet dog. The video disgusted, annoyed, and shocked the online community and it went viral. Netizens were so mad at Brooke that she had to take a break from YouTube.

Who is Brooke Houts?

Brooke is a 20-year-old YouTuber who started her vlog in 2014; she is from Atlanta, Georgia but lives in California now. She became popular because of posting vlogs about her daily life, including her dog Sphinx. She had more than 300,000 subscribers on YouTube before her fallout with netizens.

What Brooke Houts was accused of

On August 8, 2019, Brooke ‘accidentally’ posted a video showing her yelling and scolding her dog. Her dog’s name is Sphinx, and he is a Doberman. At some point, she forcefully pinned Sphinx to the ground, hit him several times, and spat on him.

Netizens were shocked, annoyed, and disgusted with the video of Brooke abusing her dog. Some of them shared the video with the necessary authorities accusing Brooke of animal cruelty. Here is what some of them had to say:

What Brooke Houts Had to Say about Abusing Her Dog

Brooke claimed that she uploaded the video ‘accidentally’ and apologized for raising her voice and yelling at Sphinx. She, however, denied spitting on him and did not mention that she had hit him. She said that she was not an animal or dog abuser in any way, form, or shape.

Animal Cruelty unit also launched investigations about the incident. They finally allowed Brooke to keep the dog because they did not think the animal was in immediate danger.

What Netizens Had to Say about Brooke’s Return to YouTube

Brooke Houts took a break from YouTube after the incident but returned online on March 6, 2020. She said that while she was away, she concentrated on her mental and physical health and joined a church group. She now posts Christian content on her channel.

However, YouTube users are not excited about her return to YouTube. Here is what some had to say:

See also  YouTube: Who is Baby Uniq on King and the Sting? Age, Instagram and five fast facts!

Nowadays, Brooke posts Bible study videos on YouTube. One can’t help wondering if her critics will ever forget or forgive her for abusing her dog. I guess only time will tell.

How did Kate Yup die? Who is Kate Yup in real life?