TikTok: What happened to the dangerous cobra that Christopher Gifford allegedly let loose? 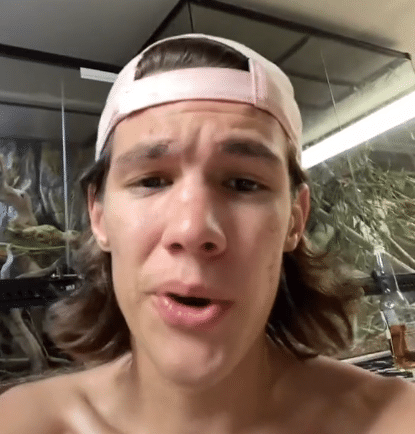 A popular TikTok user named Christopher Gifford is known for keeping venomous snakes in his home. But was one of the cobras set loose?

Find out more about this TikToker and what happened to him and his cobra.

Who is Christopher Gifford?

Chris (@the_giff) is a 21-year-old TikToker with 464k followers on TikTok. In his bio, you can see that he is a “Follower of Christ”. He lives in Raleigh, North Carolina with his parents. Other than the fact that he loves snakes, no other information about his personal life has been made public.

On 29th June, the officials warned the citizens that a venomous zebra cobra is on the loose and that people should stay away and inform the police if it is spotted, according to AP News.

An animal control officer from Raleigh noticed a snake on a resident’s porch and called 911 on the same day. It was missing from a nearby home and it vanished by the time an officer arrived.

Christopher was reported to be the owner of that snake as he has a lot of exotic snakes in his home. If you check out his TikTok account, it is filled with him taking care of the snakes and playing with them.

It is legal to own these snakes as long as these venomous and highly dangerous creatures are kept in escape-proof as well as bite-proof enclosures.

See also  On TikTok, Valkyrae recreates the viral 'Luddy' dance with Ludwig, and fans are enjoying it.

If any of them is missing, the owner is required to notify the authorities. The reason is that this zebra cobra that went missing is four feet long and is known for spitting in the eyes of people as far as nine feet away. This spit can cause the nervous system of the victim to shut down according to WRAL.

The venom can also cause blindness, tissue damage, and even death. Experts say that it is most dangerous to small children, cats, and dogs especially.

What happened to the snake?

ABC11 reported that the Raleigh police informed the residents on the night of 30th June that it has been “located and safely removed.”

Christopher was not the one who reported the snake missing but till now the police has not confirmed whether he has broken any laws in this event.