Because of TikTok comment, Redditor nearly ends her relationship 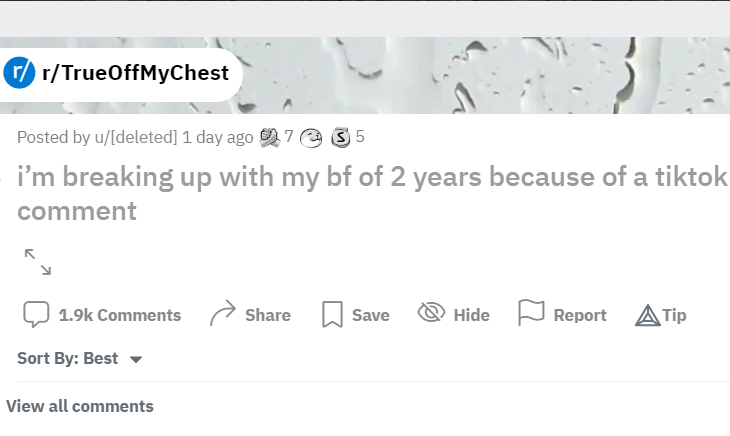 The now-deleted user shared the story, titled “I’m breaking up with my BF of 2 years because of a TikTok comment,” on Facebook yesterday, where it has received over 10,300 upvotes and 1,800 comments.

An /r/TrueOffMyChest Redditor is going viral on the subreddit after sharing her story about nearly breaking up with her two-year boyfriend for writing hateful TikTok comments.

In the post, she describes how a friend sent her a TikTok video in which a man says he got revenge on his cheating girlfriend by cheating on her, stating that it is “a woman’s duty to be nurturing and forgiving in a relationship” and that “certain men aren’t monogamous.”

As if the video’s contents weren’t disturbing enough, the user discovered her boyfriend tagging two mutual friends at the top of the comments, seemingly agreeing with the clip. He specifically mentioned “women,” a copypasta commonly used to express contempt for women when they do something deemed “cringey.”

See also  TikTok: Ponytail Challenge explained - how to get the song!

The comment appeared to be enough to persuade the 18-year-old Redditor to consider ending her relationship with her boyfriend. She stated that she thought he was a great guy before the comments and that she felt “sick” after seeing how he talked about women on TikTok. To make matters worse, she discovered comments from him on all of the videos posted by TikToker.

She later updated the story, writing about how she was driving to his workplace to break up with him when his mother called to inquire about Thanksgiving dinner. She then told his mother about what she saw on TikTok, and she informed her that he was not at work, but rather was looking at an apartment for them that he’d gotten a good deal on, with the intention of surprising her for her graduation.

This unexpected development caused her to reconsider her decision. She wrote in the final paragraph:

Shortly after, the Redditor posted another update to the story, but it has since been deleted, with no apparent archive. However, the top commenter on the first post revealed what it was ostensibly about.

According to u/kelseekill, her boyfriend explained how the comments were a ruse to try to bait another friend with similar “toxic” viewpoints to those in the videos. They were attempting to obtain evidence of his misogyny and toxicity by writing the comments in order to show his girlfriend what he thought about women.

The post has since sparked a lot of debate in the comments section. According to one Redditor, “The saddest part for me, as someone in their late twenties, is that they’re passing up the nice ass $1,000/month apartment. Teenage relationships are dumpster fires that rarely last, but you will NEVER find a better deal on housing.” Another person stated, “Isn’t this a bit of an overreaction? What the boyfriend did was stupid, but yeah.”

See also  If You Like Warren Kwan TikTok, Think Again!

It’s unclear why the Redditor deleted her second update post, but some thought it was comforting to know that things could still work out for them. We’ll have to wait and see if another update appears in the near future to bring the viral story to a close.