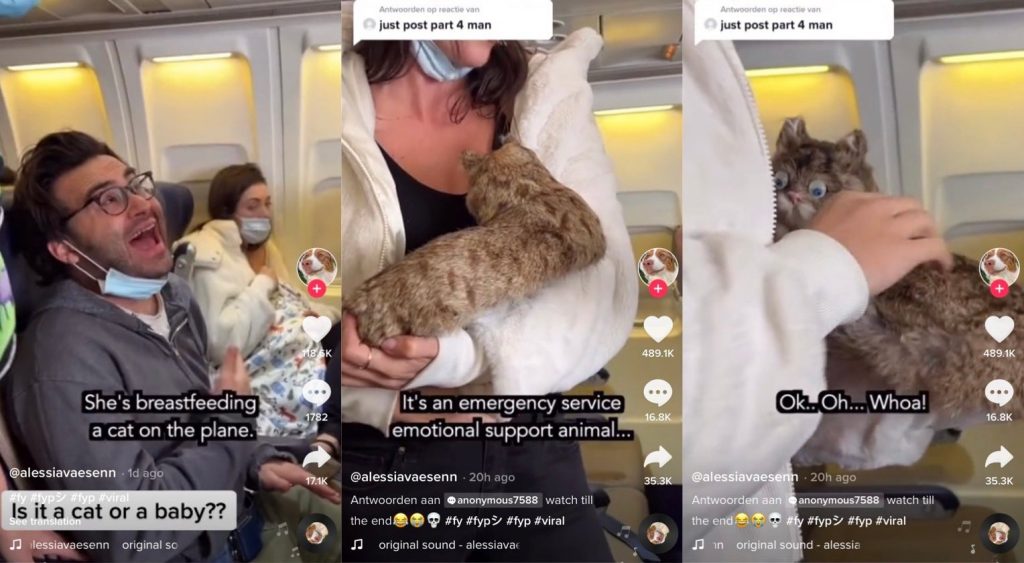 We all know that pets are not allowed on a flight. They need to be stowed in a cargo carriage. But a passenger had other ideas.

Such was her love for her cat that she smuggled her pet onboard a flight in the guise of a newborn baby. If that was not enough, the passenger then proceeded to breastfeed the cat. Yes, you read that right.  This strange incident has now become a top parody on TikTok.

A Tiktok user was so inspired by the Delta incident that she decided to post a parody on her handle. The clip she has posted has already garnered more than thirty five million views. The interesting bit is that the clip was not even created by Alessia Vaesenn. It was created by another Facebook user called Mr Gooch.

The parody clip begins with a woman sitting next to the window breastfeeding her cat which is under a knitted blanket on her lap. A male passenger seated next to her complains to a flight attendant that it is a cat and not a baby.  When the attendant requests the lady to show the baby, she refuses, saying that it is a violation of her privacy.

The hilarious clip continues with the male passenger getting agitated and requesting a change of seat. The woman then taunts, calling him ‘allergy boy’. A fake argument ensues that only adds to the humour of the strange situation At the end, the woman agrees to reveal what’s underneath the blanket.

When she pulls away the blanket, everyone bursts out laughing as a fake cat is revealed.

Cats Are Cute And Viral

We probably live in the age of cat videos. Anything to do with the feline seems to become social media gold. It was YouTube that first caught on to the phenomenon. Now other platforms are following the same lead. And Alessia Vaesenn has tuned it into a viral sensation on TikTok.