TikTok: What is the meaning of ‘Munanyo’? Five examples of the phrase! 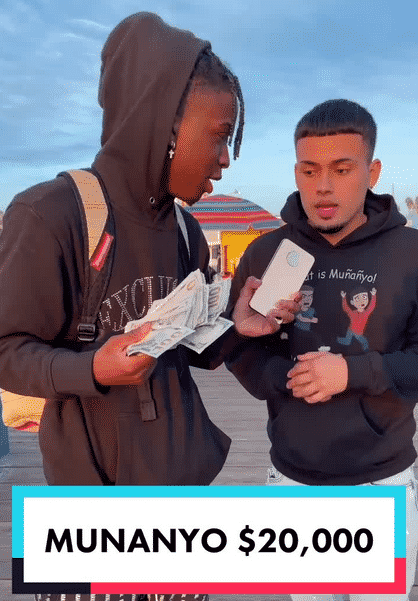 The hashtag #Munanyo is commonly used on TikTok. ‘Munanyo’ is a word that is going viral all over TikTok, and the same question is on everyone’s mind – what does it mean?

Another new TikTok trend, it can sound confusing when you just see the word. But it will all make sense when you see an example, here are some below.

What is the meaning of Munanyo?

Munanyo is a word that nobody seems to be able to explain, it doesn’t translate to anything in English, and so far no language has claimed it as a part of their own.

However, just because no one knows its exact meaning, it doesn’t mean that it hasn’t gained increasing popularity all over TikTok. There are countless videos using the hashtag and the phrase. Right now (22nd June 2021), the hashtag has gained more than 111k views on TikTok.

See also  TikTok: About the song "All we wanted was a place to feel like home" and lyrics

Here is an example of someone using the phrase and #Munanyo and incorporating it into music. This particular piece of music is often associated with other TikTok videos, and normally says ‘Oh no’ which has been replaced with ‘Munanyo’ in a clever play on words, which makes for a totally hilarious video!

Here is a prank video where someone uses the phrase as if they are addressing someone using #Munanyo as a name on the phone. Having a full phone conversation by asking for someone who goes by the name of ‘Munanyo’, the person on the phone has no idea they’re on the other end of a hilarious TikTok prank!

In this video, the user is responding to a fellow TikTok users request for him to scream ‘Munanyo’ in his brothers ear. See below for the hysterical result!

The #Munanyo is growing more and more popular each day, with the hashtag having 4.5 million views. Here is another user trying out the trend, and filming her friends response, who looks incredibly baffled!

In this video, a man shouts ‘Munanayo’ at his friend until they start to laugh. Its hard not to laugh at this hilariously random phrase!

See also  What is send nudes upside down? Sapnu Puas memes explained from Twitter and TikTok!

Will you be saying ‘Munanyo’ everywhere you go now?