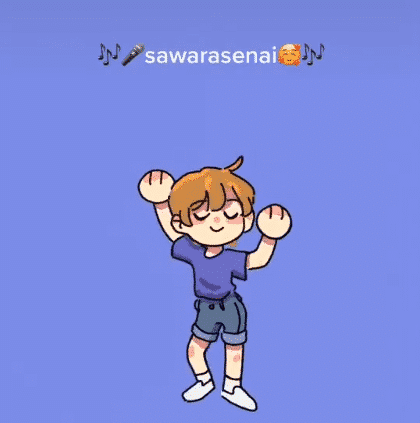 The lyrics ‘Sawarasenai Kimi Wa Shojo Na No’ is doing the rounds on TikTok, and the hashtag has over 34 million views. Fans say they cannot get the lyrics out of their heads, so what do they actually mean?

The viral lyrics come from an animé film and are sung in Japanese. Find out the translation as well as the story behind them…

The lyrics are from the song Touch You by Yarachin B*tch Club and they translate from Japanese to mean: ‘Don’t touch me, you’re a virgin’.

Where do they come from?

The main three characters are Takashi Toono, Yuu Kashima, and Kyousuke Yaguchi. The series has been self-published since 2012 and follows the life of a freshman student who joins a new, isolated school and finds friends by seducing some of the students.

The song, from one of the episodes, has proven to be a big hit with English-speaking TikTok users.

Why are they on TikTok?

Whether fans and TikTok users enjoying the song understand what the lyrics mean is unclear but the app is full of fans’ interpretations and dance routines.

Videos include people asking their grandparents to read out the lyrics, aware that they probably have no idea what they are saying. Other people are using the app’s duet feature to sing the lyrics with other fans across the world; with some people even trying to translate the story into their language!

There are so many hilarious attempts of hyping up this song. Check out some of the best memes made about this song –

That is how much users on TikTok love the song.

The song is called “Sonido Original” on TikTok and has been used in 64k videos. It was posted on the platform by a user called Alexx (@pink_dem0n) who seems to be a huge anime fane.

Do you watch anime? Which series is your favorite?