TikTok: Orangatangabangin trend asks – how fast can you spin? 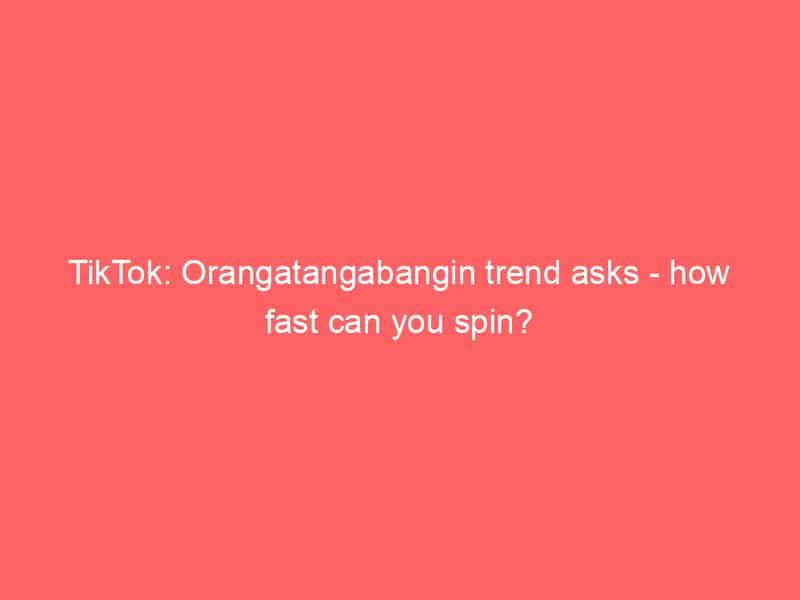 One of the latest trends to flood peoples’ For You page on TikTok is the Orangatangabagin videos.

The TikTok sound is made up of a Minecraft sample, along with a generic trap beat over the Minecraft sound and lyrics raped by a male.

What is the Orangatangabangin song?

It seems TikTok loves to make sounds that are connected to gaming, as they seem to always be a smash hit with the TikTok community. The Orangatangabangin sound has also been uploaded onto Youtube and is also available to download on Apple music.

The song was released onto Apple music on 9th March 2021 by artist Static Goonz, and features B-MAN. There is little to no information on Static Goonz as this was his first release and was made as a meme. However, the featuring artist B-MAN has had several songs before this, one being ‘Plan B’ with artist Yungbaid.

See also  Funky Town Gore: What Makes It The Goriest Video Ever?

Minecraft has been used for samples in the past many times and has also had songs made using lyrics that connect with the game too; for example ‘Shut Up and Mine’, a remix of ‘Shut Up and Drive’ by Rhianna.

What are the TikTok’s about?

From the videos on the sound, there is a video of people spinning around really quickly to match the lyrics of the song, and there is also random videos where people are talking about the song or just using it to fill in silence.

As you can see the basis of the TikTok’s are to spin around in a circle and then bang on your chest like the lyrics imply, but using the editing tools on the TikTok app you can speed up the video footage to make it look as though you are going even faster.

See also  TikTok: How to join the 27 video challenge explored - with 5 best attempts!

Here are a few funny examples:

How to get involved on TikTok

Using the original sound of the Orangatangabangin by Static Goonz so that you are involved with the main bulk of videos on this trend.

Record a video of yourself running towards the camera and spinning around in a circle, once the song says ‘Ora’ and pauses for a second, then start banging on your chest like a gorilla.

Edit the video footage so that it is slightly sped up to give the effect that you are spinning really fast.

Uplaod the edited video onto your TikTok account and watch the views roll in!

Bitch, I am Gorilla da Spinna
Orangatangabangin
All y’all hatin’ on me, I’m ’bout to come up
And all the people that’s supportin’, they ’bout to come with me
All my lil’ goonz, let’s get it

See also  TikTok: Can you do this push-up challenge?
[Verse 1: Criggy Dah Pissay]
What it is? Who it be?
It be Criggy to the P
I’m a G, what you see?
I sign your titties up for free
Don’t believe, that’s okey
Just know that I will achieve self esteem
I be lookin’ for you, but you all asleep [Verse 2: Criggy Dah Pissay]
Your contact i will delete
Smokin’ on the finest green
All the stress I will relieve
Getting paper by a string
Bitch, I’m Gorilla da Spinna
Orangatangabangin on my chest
While we singin’, these fellas be breakin’ banken
Rocking G Wang While we leave him hangin’, front door started swangin’
So we sayin boy we need to break it, oh we stankin’
It’s that gas that we smokin’, what you thinkin’?
Creep down the street, like a hobo
I don’t give a fuck if you’s a homo
Bitch, we all homo and we sapiens
Take a look inside my mind because I am an alien
[Verse 3: Criggy Dah Pissay]
I’m not Australian
But if I was one-on-one in a room with a kangaroo, I would fuckin’ go barbarian
I raise my fists and I hit him in his jumpy shit
Jump up in his pouch and tell him carry me, you lil’ bitch
See also  15 best TikTok dances of 2021 so far - Silhouette, Buss It and more!
[Bridge: Jvna Switch]
Bitch, I am Jvna tha Switcha
Or a Jew boy with the money
(That’s good, that’s good) [Verse 4: B-MAN]
Bitch, it’s B-MAN on the beat and you know this shit a banger
And if she fuckin’ with my dick, then she fuckin’ with my fingers
I got that Glock on my side, I’m finna buss it at a wanker
And I’m chiefin’ credit carts, ’bout to hit a fuckin’ blinker
Oh so I’m chillin’ with this bitch and we went to the movies
I don’t really fuck with bitches, but this bitch was a cutie
I’m talkin’ five minutes later now I’m rubbin’ on her booty
I asked Siri for directions, she said “Seconds from the coochie”
And now I’m goin’ to her house, I’m finna beat down her doonies
My stomach feelin’ kinda weird, I think I gotta take a dooky
I’m startin’ to think I’m dreamin’ ’cause you still at the movies
And bitch I look over to the slide and then she saw my fuckin’ dooky
And now she cryin’ and she screamin’ like, “You shitted in my car!”
You can even got mad because the bathroom was far
My ex got mad ’cause B-MAN got bars
Pin
Tweet
Share
Share
Orangatangabagin TikTok TikTok challenge tiktok song
Share. Facebook Twitter Pinterest LinkedIn Tumblr WhatsApp Email
Previous ArticleWhat happened to TikTok Room? Gossip account deactivated!
Next Article TikTok: What is the Firetruck game? Why you shouldn’t agree to play it