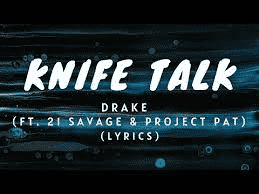 After the COVID-19 pandemic is pushed back, major rap’s heavy hitters are coming back to play. Drake’s Certified Loverboy finally dropped on Friday morning after several delays. Surprisingly, the album didn’t include previously released songs such as “Laugh Now Cry Later” or any cuts released on Scary Hours 2.

The tracklist of CLB is finally out on Thursday night. Drake intriguingly unveiled the tracklist. Interestingly, 21 Savage collaborated with Drake to produce a great project. Hence, Knife Talk marks a result of a fantastic effort by Drake and 21 Savage, with a nasty instrumental Metro Boomin’s production, with an introduction by Project Pats, which was sampled from his verse on Juicy J’s 2017 song. “Feed the street.”

No doubt! Knife talk presents a master class in hip-hop. Besides, the four-minute banger kicks off with Pat’s verse which shows his iconic Memphis twang and non –ubiquitous flow. Afterward, the song shows 21 Savage and Drake trading verses like Miles Davis and Charlie Parker trading solos on the iconic song “Au Privave.” The two rappers exhibit unique chemistry, which is essential in today’s hip-hop climate. Resultantly, Drake and 21 Savage successfully produced a sound that gels incredibly well rhythmically and thematically according to their braggadocios nature.

See also  TikTok 'rat video' trend explained - so you don't have to watch!

The energy exerted by Drake during his venomous delivery is compared with 21’s, whose bars give off a sense of introspective jadedness, thereby delivering the “gang shit” with which his general audience associates.

I heard Papi outside

And he got the double-R droppy outside

I’ma drop this shit and have these pussies droppin’ like some motherfuckin’.

Type of nigga that can’t look me in the eyes

When I see you, better put that fuckin’ pride to the side

Many times, plenty times, I survived

Keep blickies, and you know the weed sticky

My finger itchy, the Glock like to leave hickeys

Your shooters iffy, a street punk could never diss me

I come straight up out the 6, and we don’t spare sixties

I hit up err and tell him do they err, for sure

Voodoo curse, it got him while I flew to Turks