TikTok: Who is @mayengg03? Here’s why her videos were removed 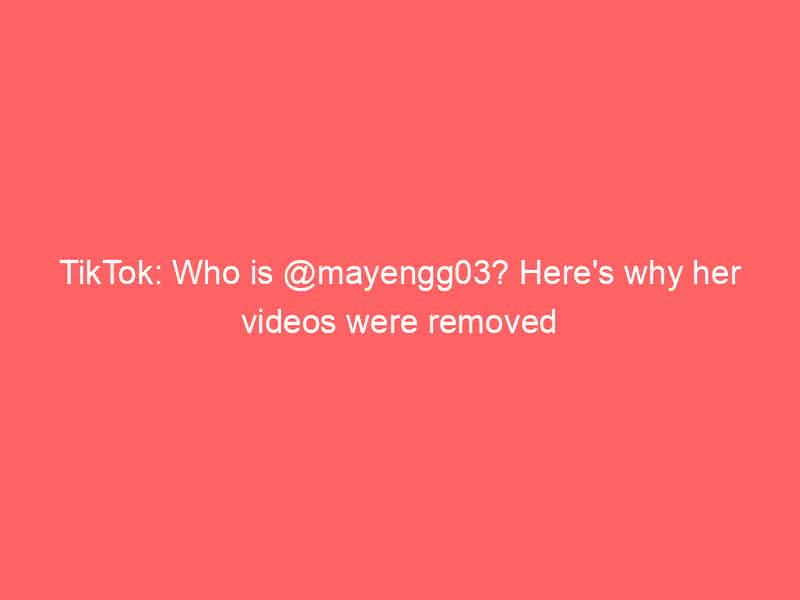 Everyone on TikTok has seen the viral video of @mayengg03 and were shocked by it. The video was soon deleted by TikTok.

But in case you missed out on the video, here is what was in it and why the platform felt it necessary to delete it. We will also share what other users have to say about this video.

A teenage TikToker whose identity is yet unknown had been posting videos on her @mayengg03 account. This account is now popular among all social media platforms due to the graphic content in her videos.

@mayengg03 has not revealed her name or any personal information online. None of her social media accounts are verified and apart from the fact that her nationality is Paranaque, we know nothing about her.

See also  TikTok: Who is Nick Navarro's (@nicky.nightmare) dad? Find out about his ethnicity and age here!

This user posted some videos and they were taken down due to violation of TikTok rules and after that it seems that the user has completely vanished. The account is also deleted but whether it was deleted by the user or the platform, we will never know.

What was in the viral TikTok video?

@mayengg03 seemed to have made some challenge video that was so graphic that TikTok had to remove the video. The video was said to have some “disturbing” and “sensitive things” that went against the company’s privacy policy.

Despite all her videos being taken down and account being deleted, the horror and trauma has not passed. People say that there was something related to decapitation as well which explains why it went viral and why it was removed.

There is also a trending hashtag #mayengg03 in her name that has about 9 million views but no one is posting the entire video as it is too disturbing. But people are showing their disgust and explaining how deranged the user was to have shared that.

A lot of people would not have seen this video and would be curious but they will never know what exactly set this off. But a girl in her teenage years can do this much damage within a few days is a cause of concern. What are your thoughts on the matter?