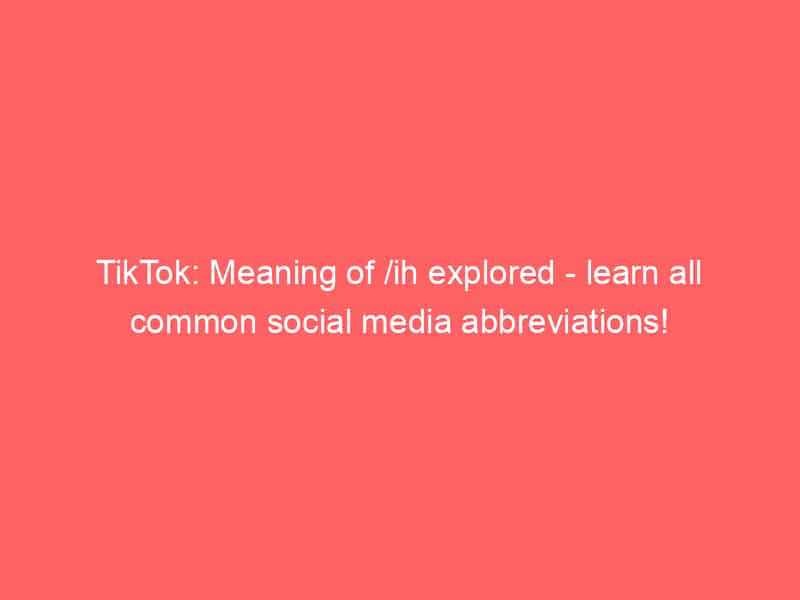 It is understandable for Twitter users to abbreviate everything as there is a character limit but then these users also use other social media platforms. So we all have to know the commonly used slangs to keep up with the conversation. Here are some commonly used abbreviations on Twitter and TikTok.

Let’s start with the fun meaning –

IH – I’m High
If you smoked weed and your a bad ass kid that is still a virgin
Example – Sped gang group chat:
Ahmed: ih
Hawa: wut does that mean?
Hawa: i think it means “I’m high”

But that’s not the most common meaning used on the platform.

ih- An internet acronym for “in hindsight”
Example – “So, ih the girls at the party weren’t as hot as I thought.”
“IH, I really don’t know if going to three pre-games was a good idea.”
“ih, I really should have studied for that test.”

Using tags like these helps improve online communication as you are expressing your emotions and expressions along with using words. You can convey what you mean without any misunderstanding.

If you are posting a sarcastic comment, make sure to use /s so no one takes you seriously and get into a fight. When you are posting about something serious, a /srs tag helps so that no one will joke in the comments and keep the conversation serious and profession.

Knowing the tone of the post can avoid a lot of unnecessary hurt but only if you use them properly. so do your homework and learn the usage from this article.