How to do the Aurora Runaway trend on TikTok – with examples! 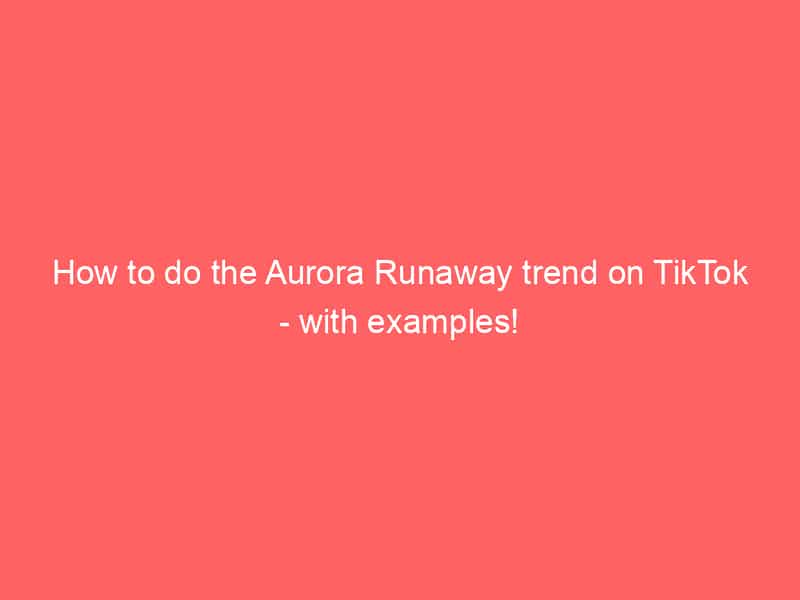 If you have a TikTok account, you may have come across the popular Aurora Runaway trend. Below we’ll discuss this, lets see if you want to give it a go!

Do you enjoy getting involved in the fun, creative side of TikTok? Well, you’re in the right place. The Aurora Runaway trend is perfect to showcase your creativity and more importantly, have fun!

What is the Aurora trend?

This trend is known as Aurora Runaway as the song used is by the artist Aurora, and is called ‘Runaway’ (Duh?)

Although the song was released back in 2016, it has recently blown up due to the Aurora trend, which some fans aren’t too happy about.

However, most of Aurora’s fans are glad she’s finally getting the recognition she deserves!

The trend involves creating a video dancing and using the ‘Aurora Runaway’ filter on Instagram so that when the video pauses, a beautiful background is shown.

How to do the Aurora Runaway trend on TikTok

The trend looks difficult at first, but once you get the hang of it it’s simple! If you’re wondering how to get involved, here’s how.

First you need to head over to Instagram, scroll through your filters until you see ‘browse’ and then search for the ‘Runaway Aurora’ filter (by @rossalindafajr_). Then go ahead and use the effect!

Tip: Make sure to have the sun in in the background of your shot for the best results!

Many tutorials have been uploaded to teach users how to do try the trend, but some have shown it to be more tricky than it really is.. so this is our personal favorite.

Here’s some of our favourite examples.

The trend doesn’t have to be done on your own, people are also getting their partners involved. Why not grab your boyfriend/girlfriend and give it a go!

Let us know your thoughts once you’ve tried the Aurora Runaway trend in the comments below!