Who is Sister Cindy on TikTok? Get to know the “slut-shaming” sister! 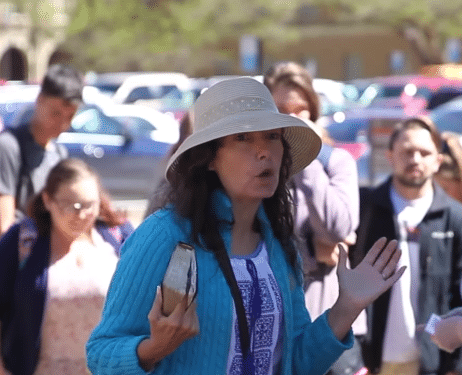 Sister Cindy, or Cindy Smock, is getting really popular on TikTok after her “Slut-Shaming Show”. Who is she and what is this show about?

Everyone comes on TikTok to see people perform and be entertained although Sister Cindy performs on campus by talking about very entertaining topics. Her videos are everywhere now – Instagram, Twitter, etc. Let’s get to know this wild woman and see what she has to say.

Who is Sister Cindy?

On her Instagram account, Sister Cindy shares that she is the wife of Brother Jed, campus preacher, mother of five children, and a grandmother of 10. Despite having to put on a lot of hats, she is doing a great job in everything.

She began preaching alongside her husband on the campus of Texas Tech University in Lubbock. While being on campus, you will see a lot of oddballs but Sister Cindy is a whole different matter.

When you see her, “street spectacle” is the phrase that comes to mind. She is a hysterical street preacher and the fact that she calls herself the “Slut-shaming Sister Cindy” just gets more attention.

Her sermons consist of pleads for female modesty that has amassed a huge following on TikTok. There is even a hashtag in her name #sistercindy that has more than 237 million views.

Her videos are going viral everywhere and teens from all over the world are engaging with them. She used to be one of those girls who committed sins like the consumption of alcohol and incessant fornication on campus in Florida.

See also  TikTok: "The moment I laid eyes on you" song with lyrics and best attempts

But after meeting and marrying Brother Jed, she now condemns those behaviors and actions. You can listen to her story in the videos where she screams the sermons to the crowds. She calls these sermons the “Slut-shaming” show.

If you like what you see, you can sign up for her newsletter and get regular updates.

Get to know her husband – Brother Jed

The main reason for such a change in Sister Cindy’s life is her husband Jed Smock. His sermons moved her so much that she not only changed her ways but is not following in his footsteps and making sure other girls do not make the same mistakes she did.

He shares on his website that they started out with a dinner where he explained the errors of her lascivious lifestyle. Cindy wasn’t moved at first but he eventually swayed her in his ways. That’s how the couple started dating!

You can check out her sermons on her TikTok account or you can see the couple account to check Brother Jed’s sermons as well.

Cindy is pretty active on Instagram where she posts her sermons and photos with kids on campus.