What Actually Is the ‘Sleepy Chicken’ TikTok Trend? 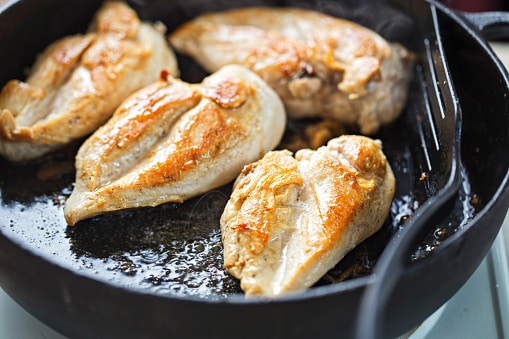 Concerns have been raised about the TikTok fad of “sleepy chicken,” also known as “NyQuil chicken” in certain uploads on the video-sharing app.

The unique chicken cooking fad, which evidently has previously been disseminated (as in this TikTok video from 2020), has now returned with the threat of the Omicron strain in the ongoing COVID-19 pandemic.

Back in 2020, user @gorditofamoso tweeted a clip of the recipe video with the words: “Please don’t do this at home, it’s plain horrible.”

What Really is the TikTok ‘Sleepy Chicken’ Trend?

See also  What is the Vegeta green jacket trend that is taking over TikTok? Viral profile picture explained!

According to the US National Library of Medicine’s DailyMed website, one of the three active chemicals in NyQuil is doxylamine succinate, an antihistamine.

According to the Mayo Clinic, doxylamine succinate is a sedating antihistamine, which means it might produce drowsiness.

“I felt ill last night, so I’m frying up some NyQuil chicken,” the individual preparing the chicken remarked in one video.

Doctors have issued warnings about the risks of the “Nyquil chicken” recipe.

“When you cook cough medicine like NyQuil, you boil off the water and alcohol in it, leaving the chicken saturated with a super concentrated amount of drugs in the meat,” Dr. Aaron Hartman, a physician and assistant clinical professor of family medicine at Virginia Commonwealth University, told Mic.com.

See also  Instagram: How to get the Runaway Aurora Filter

“If you ate one of those cutlets properly cooked, you’d be ingesting a quarter to half a bottle of NyQuil,” he explained.

One of the most dangerous aspects of this chicken mixture is that “by cooking a medication with numerous medicines in it on a cooktop, you’ve aerosolized it and are most likely breathing it,” according to Hartman.

“Inhaled, these drugs also reach your circulation fairly fast and do not pass through your liver for detoxification,” he said, adding that “the consequences may be pretty serious depending on how much you inhale.”

Hartman also warned that if the chicken is simply boiled in a liquid for “five minutes” (as stated in one of the chicken cooking videos), it might cause food illness.

Dr. Jeff Foster warned The Sun newspaper in the United Kingdom that social media should never be used as a source of medical information because it tends to “bring out the worst in some cases, hence the Darwinian approach of anti-vaxxers who obtain their medical research from such sources as Facebook and Instagram.”

“The NyQuil chicken instance is no exception. “The concept of soaking any food product in medicine in the hope of obtaining some unique health advantage or cure is not only ridiculous but extremely hazardous,” he continued.

Newsweek has reached out to TikTok, the US Food and Drug Administration, the US Centers for Disease Control and Prevention, and the American College of Physicians for comment.