What is the meaning of Candice on TikTok? Inside joke explained! 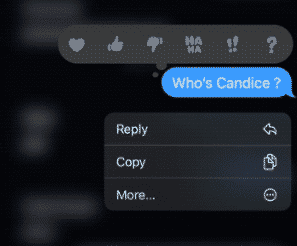 You’ve probably heard of or been hit with the “Who’s Candice?” joke on social media, but who actually is Candice, and what does this joke mean?

If you’re reading this article before anybody’s asked you who Candice is, thank us later!

You probably don’t want to fall for the latest social media joke, you want to be the one to do it to your friends… so keep reading and we’ll tell you everything you need to know, from what the joke is to some hilarious examples on TikTok!

What is the Candice joke?

If you haven’t yet fallen for the hilarious prank – you won’t know that Candice isn’t actually a person… it’s an inside joke!

Candice is a prank people all over social media are playing on not only their friends and partners but strangers too!

Candice – is supposed to sound like can-dis as in “Can This”, but the name Candice is used instead for the joke to work… it’s usually then followed by something pretty inappropriate, which is all part of the prank.

This sounds confusing, let us give you an example!

cool guy: Do you know Candice?

Users all over social media are falling for the “Who’s Candice?” joke, here are some hilarious examples we love!

@blair_brownxo tried this prank on her boyfriend… and the results are hilarious.

TikTok users are trying this joke on other users’ live videos!

There’s a mixed reaction about the Candice joke by users on Twitter.

Some people are reacting a bit over the top when they fall for a Candice joke… (you’re welcome for helping you avoid this!)

What do you think about the Candice joke? Is it classy or is it trashy? Let us know!