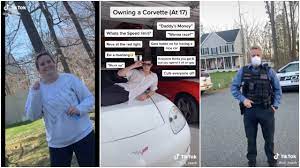 18-year-old teenager, Zachary Latham acquired a Corvette sports car. He used to drive it recklessly around his neighborhood. (At a speed of more than 100mph). His actions bothered. In this way, he agitated his neighbors.

Latham’s neighbors William and Catherine Durham talked with him about the issue, and Latham didn’t heed their concerns. Both the families continued arguing back and forth for about two years, with the conflicts constantly rising.

Later on, in 2020, Catherine was confronting Latham about his rash driving. Meanwhile, Zachary Latham recorded the confrontation and uploaded the video on “Tik Tok.” In this video, he was constantly using slang and was calling Catherine “Karen.” The video of this altercation went viral, and it hit over 3 million views. People started liking the video, and this encouraged Latham to carry on his predatory approach.

Subsequently, Latham started teasing his neighbors more intensely by driving recklessly. He was continuously taunting them, and he wanted to agitate them and get their reactions to his Tik-Tok videos. Durhams also consulted the police multiple times to sort out the issue in a legal manner. But, the police took no excellent action.

Now, fame and the heedlessness of police encouraged Latham to behave in more ill-mannered behavior. His actions include obnoxiously reviving his Corvette’s engine. He blew a kiss to Mrs. Durham in one of his videos. Also, he swerved a vehicle towards his son while riding a bicycle. These incidents perturbed Durhams. Now, Latham compelled them to take the matter into their own hands. They went to Latham’s house, which ensued the argument. This argument went to the extent that Latham tried to confront Durhams with weapons, guns, and knives. During this physical fight, Latham’s wife was recording everything.

Meanwhile, Latham shot Durham’s son with his gun. He also tried to stab Mr. Durham multiple times. As a result, 51-year-old William Durham died. Police seized both families due to this conflict. Latham was charged with first-degree aggravated manslaughter. At the same time, Durham was arrested for trespassing. Unfortunately, this didn’t satisfy the grief of Durham.